The last weekend, I spent a couple of days at the Hobbycrafts show at the NEC. Purely for research purposes you understand 😉 Although a small amount of shopping may have somehow found its way into my possession. It must have fallen off a display or something!

I took a few pictures of things that impressed or disturbed me.

A cross stitched QR code which pleased my inner geek greatly. It even works! 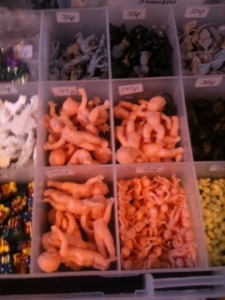 You too can purchase naked plastic babies in a variety of sizes. I dread to think what you’d use them for :S

Finally, stuck for what to wear to that fancy dress party?

Now your whole family can be owls. I mean how could you resist, just look at the glasses.

Yesterday I was in the city to learn about tax on another course from HMRC. I know that if I want to do this business properly which I do, tax is very important. It still doesn’t make in remotely interesting though. I thought after two and a half hours of that I deserved a treat so… 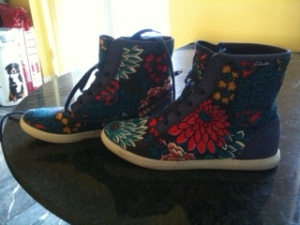 New shoes are made of awesome. They are Liberty print fabric and from Clarks.

As for what I’ve been working on? The quilt of basting doom is currently on hold while I recover sufficient patience to continue with it. Instead, I’ve completed my first ever dressmaking project. I used a kit from Clothkits as I don’t have the confidence to try a paper pattern just yet. I’m delighted with the result. It’s the first time I’ve ever put a zip into anything and while it’s not entirely perfect, it is at least completely my own.

So, I sewed up the quilt top, pieced the backing and cut the wadding to size. Then it was just a case of basting it so it all stayed in place while I was quilting. A simple task surely?

This was a failure. Unfortunately I didn’t realise that until I’d already basted the whole thing. The backing wasn’t stretched taut enough so when I started quilting, I ended up with creases and wrinkles sewn in. I gave up for the day.

Yesterday I spent the first hour unpicking all the previous days efforts to start again. This left me feeling so despondent that I thought I’d treat myself to a trip to Hobbycraft for a browse. I was really well behaved and didn’t buy anything but spent a happy half hour having a mooch.

I’m a sucker for any device that claims to save you time. This means I’d invested in a microstitch basting gun. It fires small tacks through the layers to hold them together and is allegedly much faster than pinning.

So off I went, firing tacks left, right and centre. Five minutes later, *snap*, I’d pressed too hard and broken the needle. So back to Hobbycraft I went to buy some quilters safety pins. It seemed I was going to have to pin baste after all.

Everything was finally going to plan. I pinned the centre and started working out. I was over halfway there, on the home stretch when… I ran out of pins. I thought the 150 I’d bought would be more than enough but clearly not. Back to Hobbycraft I went yet again. By this point the staff were viewing me rather suspiciously (what sort of person visits a shop three times in as many hours) so I paid for my extra pins and fled.

By the time I’d finished it was 8pm and dark but it was done. A task that should have taken me an hour took more like six. I am filing this under “it’s done, now let us never speak of it again”. It just better be taut enough this time…

Despite my promises to myself that I’d update this at least twice a week, I’ve not quite managed. Amazing how time runs away when you’re enjoying yourself! I’ve been busy locating and booking fairs for over the summer as well as learning about tax and allowable expenses from HMRC.

Still it hasn’t stopped me getting on with a new project. It’s another quilt again using fabric picked up when I was in Vegas. I’m using the pattern Polka-Dot Parfait by Cotton Way with the fabrics as pictured in the design (Bliss by Moda).

For some reason mine have ended up at 9″ square rather than the specified 9.25″ but I suspect that’s more to do with my dodgy sewing than an inherent pattern error.

Then it was a case of laying them out to decide on the pattern. Trouble is my floor wasn’t quite big enough but it was enough to get the idea. I always find this part quite fiddly, making sure that identical patterns and colours aren’t next to each other. It’s always hardest doing the bottom row as you’ve only got a few blocks left and it’s difficult to substitute them as it wrecks what you’ve already done. Still, I’m pretty pleased with the overall result. 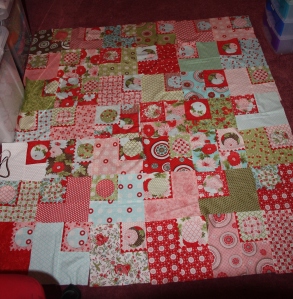 Now to get the rows sewn up and then connected together before adding the borders. I’ve also got to decide what pattern to quilt it in, I’m really not sure yet.

As a change from the Patchwork, here’s some jewellery:

18″ necklace made from turquoise nuggets and BIWA (stick) pearls with a large turquoise focal. I adore big sculptural pieces of jewellery and I think the large drop on this really sets it off. Would be a perfect way to accent a little black dress or similar. 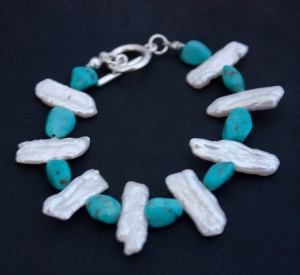 I apologise for the photos, jewellery photography is something I’m still trying to get my head around. It’s very difficult to get the right lighting especially on a rather dull British day.

When I said I didn’t want it to be another 18 months before my next quilt was finished, I didn’t realise it was going to be a few days! I’ve been working through my ‘to sew’ pile of things that I’d mostly finished and it included these: 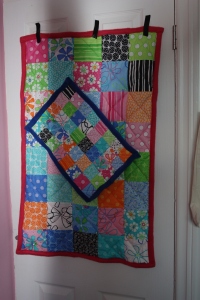 These, and several others, have all been made from one layer cake of something or other by Moda that I can’t remember. The baby quilt is quarter of a layer cake so 5″ squares and the mini is a sixteenth of the cake so 2.5″ squares. They’re both backed with fleece to make them extra snuggly.

They were an experiment in using an allegedly speedy method of quilt making from a book called 90 minute quilts. A lot of time is saved as they are self-bound using the backing fabric. It took me a bit longer than 90 minutes, more like 3 months if you include the time sat on my desk but if I hadn’t got distracted half way through though, I could definitely complete one in an afternoon.

Close up shows the quilting detail, going through both diagonals of each square.

It seems appropriate that the first post on my crafty blog is a celebration of another first, my first completed quilt. I bought the fabric for this when I was in Las Vegas for my 25th birthday, so it’s only taken 18 months to finish.

Fabric is from the Timeless Treasures Dino collection. Strangely appropriate for someone with a degree in geology from another life.

Quilted in approximately straight lines (I may need a bit of practice!) in a cross hatch pattern with lines spaced by 1.5″.

Machine bound (another first) using this wonderful tutorial from Red Pepper Quilts. This is another technique that I expect will improve with practice but it’s far quicker and stronger than slip stitching it down, a win-win situation I feel.

It’s positioned in pride of place on the sofa bed in my office, along with the first piece of patchwork I ever made.I hope Tigger and Bear appreciate it.